Why We’re Not Talking About Sex

Do you struggle to talk to your partner about what you like and dislike in bed? You’re not the only one.

According to our survey, 2 in 5 of us find it too awkward to talk to our partner about sex, and just under half of us secretly hate something our partner does, but are too polite to tell them. 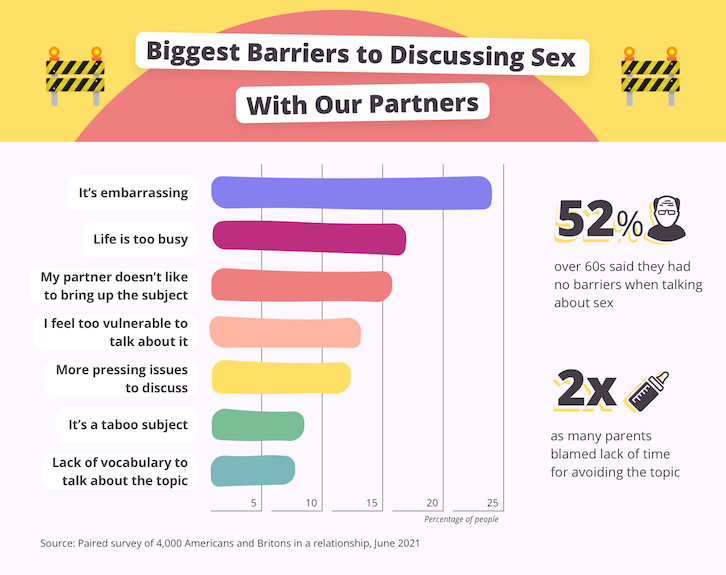 Why is it so difficult to talk about sex?

The research of 4,000 Americans and Britons in every kind of relationship, took a deep dive into all things intimate to provide a closer look at sex lives across the US and UK, revealing that the biggest barrier to talking about sex in a relationship is feeling too embarrassed and self-conscious (24 percent).

Those with children in the UK were twice as likely to blame lack of time for avoiding the subject of sex and 2 in ten men revealed they didn’t talk about sex because they felt their partner didn’t want to talk about it – this applied to both countries.

Other common barriers to discussing sex cited were having more pressing things to talk about it; feeling ashamed, and not knowing the right words.

Dr. Marisa T. Cohen, relationship expert at Paired, explains, “Discussing sex with your partner can be challenging as it requires vulnerability. People may need to face insecurities they have (about sex or the relationship in general), or directly confront the fear of rejection/perceived fear of rejection.” 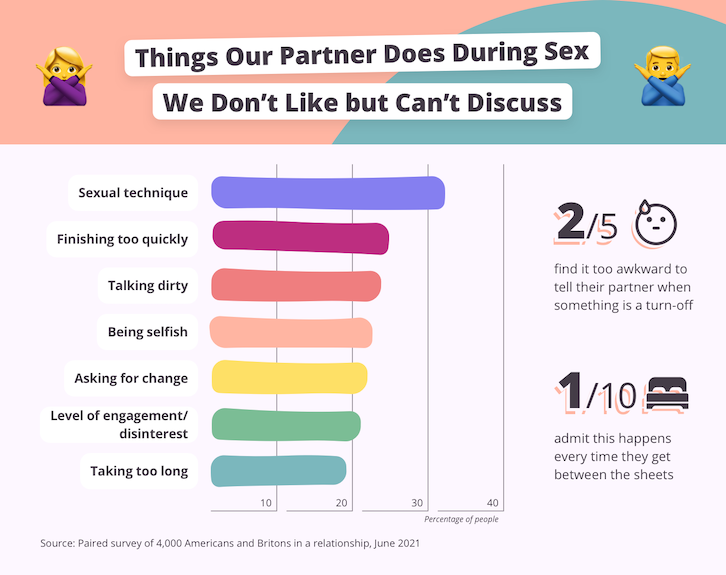 The things we’re not saying

When asked about what they’re not saying, 42 percent of the British and 39 percent of American participants confessed there is a specific “thing” that their other half does in the bedroom which they find a total turn-off but find it too awkward to talk about – in fact, one in ten admitted this happens every time they get in between the sheets.

Sexual technique emerged as the biggest complaint left unsaid across both counties (40 percent of Americans/35 percent of Britons). In the US 26 percent revealed they struggled to ask to change things up and 23 percent of Brits said they found their partner selfish when it comes to sex.

Over a third of dating couples in the UK complained finishing too quickly was their most pressing concern; and across all relationship types, twice as many women as men worried that their partner wants more sex than they do (22 percent). 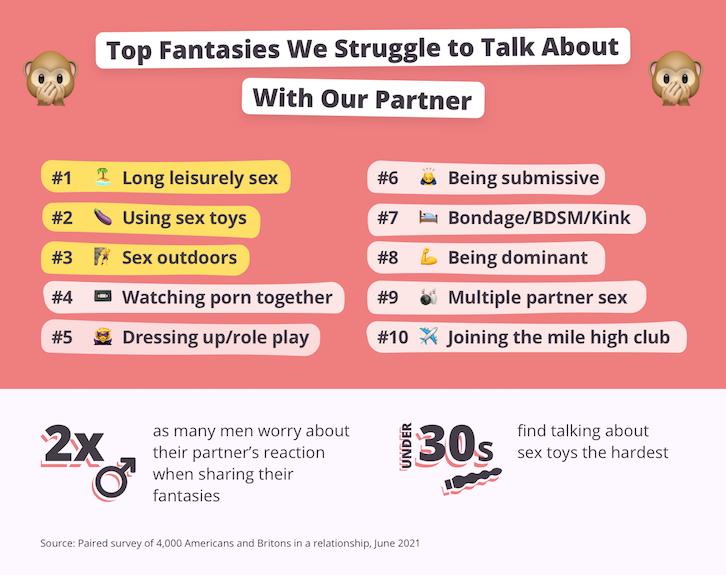 The study also found that we’re reluctant to open up about our secret fantasies and desires: longer, slower sex was the number one request for more than 1 in 4 of the participants in both the US and UK; followed by 26 percent of Americans/23 percent of Britons who wished they could introduce the idea of sex toys to their other half; and 20 percent would like to have sex outdoors in a public place.

Explaining the importance of discussing sex in a relationship Paired’s Dr. Marisa T. Cohen, comments: “Communication is key as those who have difficulties discussing their sexual likes and dislikes may be less likely to have sex and find it less enjoyable, which can impact the relationship as a whole. If you are struggling to talk to your partner about sex I suggest: